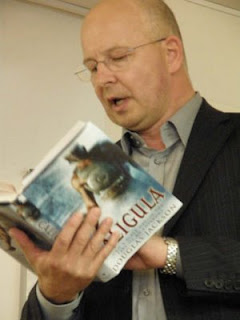 What a fantastic week I've had. First the publication and knowing that finally the book was out there. Then the launch party at Blackwells in Edinburgh and standing on the stairs to make my speech and looking out over a sea of faces who had come to support me. You could almost feel yourself being carried along on a wave of good feeling. A once in a lifetime experience.
People came from Jedburgh, Ancrum, Edinburgh, Earlston and Bridge of Allan to name but a few and it was great to see so many friends and family. I think I have to single out a couple of people for special mention, though. First Rab McNeil, who is a columnist for The Scotsman and probably Scotland's funniest writer. As well as being brilliant, Rab is almost terminally shy. He sent me an e-mail giving about a dozen reasons why he wasn't going to come and then turned up anyway with the lovely lady he calls 'the burd'. And Lesley Riddoch, another Scotsman columnist and one of Scotland's finest broadcasters. Lesley and I hadn't even met, but I sometimes deal with her copy when I'm editing the paper. I sent her an invitation, not expecting her to turn up. But there she was giving her support to a guy she hadn't seen in the flesh before! Absolutely brilliant.

I barely got a chance to talk properly to anyone at the launch, all I did was float about giving a word here and there and then spent half an hour or so signing books. Last night we had about 20 friends from Bridge of Allan round at the house for a drink and a blether. It was great fun and the amazing thing was that in the four days since the book launch at least three people had got through the entire 400-odd pages of Caligula. The verdict: 'It's a real page turner. I got into it and I couldn't put it down.' These people are my mates, so you could say they're biased, but their views chime with just about everybody who's read it so far and I think that's a great sign.

I keep an eye on (read that as I'm obsessed with) Amazon to see how the book's doing. It's hard to tell exactly, but I'm about 30th in the historical fiction list which I'm taking as encouraging for a first novel by an unknown writer. Caligula has been paired on Amazon with Harry Sidebottom's Warrior of Rome, which reached No. 9 in the Mail on Sunday's best-sellerlist today, which must also be good news. Now I'm waiting for the first reader reviews with crossed fingers, toes etc.

After the launch on Tuesday we travelled to the Borders to stay at Fauhope House, a beautful guest house owned by my friends Sheila and Ian Robson. Sheila's the AA's Scottish landlady of the year for 2008, a wonderful hostess and a great laugh. I signed a book for them and she had it on the table in the hall along with my Scotsman write-up and was telling all her guests to buy it. We had a brilliant time, including a lovely meal in Melrose at the restaurant they used to own, Marmion's. But the highlight was on Thursday when I spent a morning fishing on the Tweed. At 1.05pm, with my last cast of the day and after years of trying, I hooked and landed my first salmon, a 7 and a half pound beauty who was returned unharmed to go on her way to the spawning grounds after giving me a fight I'll never forget. What a week. First novel. First salmon. And I still haven't checked my lottery ticket.

A quick update on my other books. Simon, my editor, has read Claudius/The War God and in his under-stated way is giving off very positive vibes. 'It'll make a very good book.' 'I think you should make more of this character.' 'I really like the first battle scene' etc. He's sending me up his notes this week and then I'll be able to get stuck into the rewrite. I can't wait.

Stan, the agent, has sent me his reaction to Brothers in Arms: 'It's very, VERY nearly there.' He's planning to send it off to Simon in the next week or so to have a look at. Will he like it?Instinct tells me it's still at least one rewrite away from the real deal, but that there's enough evidence that it will make a great start to a great series. I have four pretty solid ideas for follow ups and wrote a wonderfully chilling first chapter for one of them on Friday and Saturday. It looks like being a busy next few months.