Could this field be one of Scotland's lost archaeological wonders? 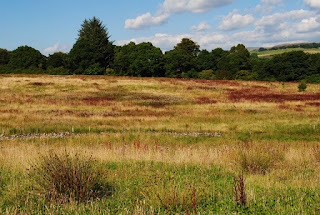 Could a neglected field outside Bridge of Allan be be the site of one of Scotland's lost wonders?

The answer is that we'll probably never know for certain, but bear with me.

First a confession. My only experience as an archaeologist is that I've never missed an episode of Time Team, even the really boring ones where they dig in city back gardens and find 18th century rubbish. Not only that but I write historical novels and thrillers, which means I make things up about old stuff for a living. Still, I hope you'll find my theory is worth considering.

To put the field into context (NS 7825 9845). It faces east, towards the rising sun, and is perched on the edge of the Allan valley. It forms part of what has been a thriving landscape for more than three thousand years. Not far away on the low ground is what we call the 'carse' where the rivers Forth, Allan and Teith meet; rich farming land now, but formerly a vast wetland that would have teemed with salmon, trout and eels, many species of ducks, geese and swans, otter and beaver to provide skins for clothing and warmth, reedbeds to thatch roofs, and for bedding and mats. The land overlooking and surrounding this neolithic supermarket would have been prime real estate.

That's backed up by the archaeological record. Directly across the valley on Bridge of Allan golf course is a neolithic burial mound called, romantically, the Faerie Knowe of Pendreich,and there have been many other neolithic finds on the shelf of land that is now Upper Bridge of Allan (see prime real estate). Standing stones of great antiquity can still be seen at Stirling University, across the Forth valley at Randolphfield in Stirling, and at Sheriffmuir. Perhaps more importantly for my theory, the top part of one which once stood in our field has been resited nearby at the entrance to a path along the river. A host of bronze axes and the three wonderful gold torcs, Scotland's richest hoard, found only a few miles away at Blairdrummond bear testament to the relative prosperity of the people who raised these stones.

I was first drawn to the field a few years ago by reports of a Roman road and fort. The road turns out to be one of General Wade's and the fort isn't Roman, but it was impossible to be disappointed. The fort is a wonderful, atmospheric place, the haunt of deer and badgers now, a mere clump of trees on a raised mound in a field, but with a mystical quality. It has only had the most cursory archaeological examination (Canmore ID 45987) and all you can say for certain is that it's very ancient. The first thing that struck me is that it isn't really a fort, in the sense of a defensive fortification, at all. It's in a terrible location. Perched on an outcrop of rock, it is too small to hold a decent sized garrison or population, and it's overlooked by two hills where archers or spearmen could have poured down missiles on any defenders. If you were going to protect your community you would have built something much larger on one of the adjacent hills.

The hill to the fort's south-east is called Knock Hill, the one to the north-west is Gallow Hill. If you take the steep path up through the trees on Gallow Hill you will come to something that isn't marked on any map, but that I believe is definitely another ancient site. Blink, and you'd miss it, but look carefully and among the trees on top of the hill there's a low, circular mound about sixty feet across with what appears to be a cairn at the centre. Look closer still and fourteen stones, two of them quite large, possibly weighing up to half a ton, appear to define the outside of the circle. So what? Well those stones can only have come from the river valley a quarter of a mile away and three hundred feet below. Imagine the amount of time and energy it took to drag those big boulders up to the top of the hill and place them precisely in position. What kind of person - assuming this is a burial mound - was deserving of this much effort? What value must he have had to his community? What if - the first of many what if's - the fort and the mound are contemporary? Could the fort be some kind of guardhouse to protect the person buried at the top of the hill or the artefacts buried with him?

The next clue is that the stones surrounding the mound seem to be of a specific geological type, a type that in certain light is a lovely blue-green colour. Our field stretches from the burial mound to the gorge that drops sharply down to the Allan river and is split by a ditch that carries the run-off from a dewpond or spring beside the fort. Walk down the western side of the field and look carefully and you'll find at least forty boulders. Again, so what? Stones in a field, big deal. But almost all of those stones are blue-green and a couple of them must weigh at least a ton. I've walked all over the Allan valley for twenty years and the only places I've seen stones like that are at the bottom of the river gorge in the river itself, or in that field. How did they get there? A few stones do not a theory make, I hear you say, and you'd be right. So let's take a step back, down towards the old soldier's road, and the standing stone that once stood in our field.

Follow the path from the standing stone along the bottom edge of the field, where the ground drops away to the river. It'll eventually bring you round to the corner of the field diagonally opposite the fort and directly below the burial. Look to your left and you'll see a pile of stones, the kind a farmer makes when he clears a field. Look beyond into the bushes at the gate and there's a pile of much larger stones and they're blue-green in colour. Glance to your right and there's another pile. This time really massive ones, weighing half a a ton apiece, and they're blue-green, too. The stones in those piles must have been placed there by someone, but they're most likely to have been cleared from the field at some point in the past. I've counted over forty of the big stones in those piles, which with those still in the field makes eighty-plus stones altogether. All, seemingly originally dragged up from river below, at huge cost in time and labour to the community, but for what purpose?

The ancient peoples didn't create their monuments and burial grounds from uniform materials. They used what was available, and what was available became sacred to them, whether stones or wood. There was at least one standing stone in this field, who's to say there weren't more? What if these eighty-odd stones, chosen for their specific characteristics, created an avenue associated with the burial, or were laid out in some geometric pattern for a ritual purpose - think Stonehenge or Avebury, but on a smaller scale - wouldn't that make this the most important neolithic site in mainland Scotland, and on a par with the Ring of Brodgar and the Standing Stones at Callanish? Depending on plough damage, modern archaeological techniques like ground radar have the potential to identify the pits the stones occupied, allowing us to see the original pattern, and even perhaps map out where individual stones stood, giving a picture of what was once there.

The good news is that although it's not on any map, the stone ring at the top of the hill is known and is a protected site. Murray Cook who looks after archaeology for Stirling Council agrees that the stones might well have once been part of a monument, but since they're out of context there's little to be learned from them. Unfortunately, he also tells me that the geology of the area makes a geophysics survey problematic. I suspect another reason is economic: unless the stones are confirmed as having some archaeological significance there's no reason for committing resources to the field, and vice versa. A shame, because it strikes me that we actually know surprisingly little about most of our ancient places. Still I had a great few days playing archaeological detective and I created this romantic notion of a great henge-like monument in the field, linked to the grave at the top of the hill, and all guarded by some warrior elite housed in the fort. A pity we'll never know for sure.