One of the best things about my new existence is getting out to meet interesting people, whether it's in a prison or at a book festival. It happened last night when I had the pleasure and the privilege to meet an extraordinary character whose story of has captivated thousands of people. 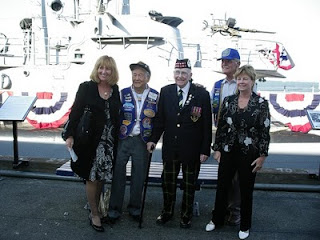 Alistair on a visit to the US, where he met veterans of the USS Pampanito, which sank the hell ship he was trapped in
As a journalist one of the first things you are told is not to use the word miracle, but I make no apologies for describing Alistair Urquhart as a walking miracle. Alistair, from Aberdeen, survived the fall of Singapore and was captured by the Japanese in February 1942. He was forced to build the Burma Railway on a handful of rice a day and with men dying like flies around him, survived cholera, dysentery and beriberi, was locked in the hold of a Death Ship with five hundred men, some of whom resorted to cannibalism to stay alive, torpedoed and finally held in Japan where on 9 August 1945 he felt the blast wave of the Nagasaki bomb.

His book, The Forgotten Highlander, was published in October, shot to the No. 1 slot in the Sunday Times non-fiction list and is already in its fifth reprint. I'd been asked to chair an event he was doing at Stirling University's MacRobert Theatre. At 91, and still with the scars of the beatings he received, he's a ball of energy who kept an audience of three hundred spellbound for an hour and a half. His harrowing story, told with brutal honesty, had many in tears.

There are two shameful threads to The Forgotten Highlander. The first is his treatment at the hands of the Japanese who kept their prisoners in appalling conditions that killed many of his compatriots. The stories of casual beatings, horrific executions and systematic, agonising torture are a terrible indictment against a nation which has never truly acknowledged its guilt.

The second is his disgraceful treatment on his release by the British government which had sent him to war so inadequately prepared in the first place. Like thousands of others he was forced to sign a declaration swearing he would never talk about his ordeal. He was sent home by a circuitous route and arrived back in Britain to no formal welcome or acknowledgement of his suffering. Incredibly, when he received his back pay the authorities had deducted money for his keep. This from a man who had slept outdoors to avoid the bugs in the hut he had built himself and lived on grains of weevily rice for three years. And in a final insult he was refused a disability pension because he couldn't provide the records to prove he'd suffered from the diseases and beatings he claimed.

His disgust at the way he was treated by his government is still palpable after almost seventy years. Nor will he ever forgive or forget his treatment at the hands of the Japanese, who he still believes have never learned the lessons of World War Two.

Alistair only wrote his memoirs with reluctance, but when he recognised its astonishing success he saw the opportunity to launch a crusade to ensure that future generations would never forget those who suffered so much for their country and who received so little in return. In the most literal sense his book has given this amazing old gentleman a new lease of life.

If you haven't read The Forgotten Highlander, you should. Some things should never be forgotten.

Pirates off the starboard bow

At the end of last week I did a search for my books on Google, as you do, to see if any of them had been recently reviewed.

What I discovered came as a total shock. My first book, Caligula, appeared on dozens and dozens of new sites and every one of them was offering it as a free illegal download. How does this happen? I have no idea, but it came very soon after the book was released on Kindle in the US and most of the sites were US based.

According to the numbers on one site Caligula had been downloaded 30,000 times. Multiply that by ten or twenty and the figures are astonishing. Yet the author, who has invested a huge amount of time and effort and more importantly, the publisher, who has invested enormous amounts of money to turn a gem of an idea into reality, don't get a single penny.

I did a little research on the subject and discovered that a lot of people on the web think it's great fun and something to take advantage of. But the figures are astonishing. A study in the United States into a thousand published books in different genres found that over nine million pirated book copies have been downloaded. They estimate that this represents total losses to the already hard-pressed publishing industry of almost three billion dollars. Online piracy now adds up to around ten per cent of total US book sales.

A few years back I used to laugh at the big name stars who moaned about their music being downloaded illegally. Now I know how it feels. As if you've been mugged.

Sure, you can argue that Caligula has now been seen by several thousand people who probably wouldn't have paid to read it, and maybe I have a wider fan base than I had before, but that doesn't help the book's sales figures or my chances of getting the new book deals that are now my lifeblood. The internet is a huge part of all our lives, and its impact will undoubtedly become even more significant in the coming years. But it can break as well as make. As a journalist I'm not generally in favour of censorship, but surely its about time to introduce some form of international regulation to control what appears on the web and how its used.

The net is a wonderful phenomenon, we shouldn't allow it to continue to be a breeding ground for crooks, terrorists and perverts.

I've just noticed that my last post was the hundredth blog I'd written, so it should probably have been about something a little more groundbreaking and important than my writing jumper. Last night I took the chance to have a look at the original postings way back in 2007 and in a lot of ways I achieved what I set out to do, although it didn't feel like it at the time when I was only painting a tiny corner of the picture with each post. I wanted to give people a chance to experience the run up to my first book and all the highs and lows that a first-time novelist goes through; the excitement and the hunger for the next bit of progress and the fear that it isn't going to happen. Hopefully I managed it.

I thought I'd be a little bit lazy and just post that first blog entry again, because the last sentence is a bit of gypsy prophecy that has certainly come true so far.

Hi, my first book, Caligula, is being published in July and it occurred to me people might be interested in the highs and lows of a debut novelist.

I'm Doug Jackson, a writer and journalist from Scotland. I've been writing for three or four years now and been fortunate enough to land a two book deal with Transworld publishers. My first novel Caligula comes out on 14 July. I know there's a large community of people out there with the ambition to be novelists, and I thought my experiences might be interesting and hopefully helpful to them.

THE STORY SO FAR

I was having lunch one day with a friend - Nicola Barry a newspaper columnist whose own book Mother's Ruin was published this year. She was doing the MLitt course at Glasgow University and while we were chatting she suddenly said: 'You should write a book. I bet it would be really gritty'. So I thought, OK I will.

I didn't start out to write a book about Caligula, I started writing a book about an Emperor's elephant - or at least the slave who brought it to Britain. I've always been interested in history. When I was listening to a documentary on the history of Britain in the car and someone told the story of how the Emperor Claudius rode in triumph at Colchester on an elephant it seemed like a worthwhile story to tell.

When I got home I sat in from of the computer and wrote 500 words in an hour. I've been writing or revising just about every day since.

I remember the first sentence I typed, because I was really proud of it. It said: 'My father was a great man. He tamed the wild beasts and made them do his bidding.' Six months later it took me a month to write my way out of the hole that sentence got me into.

You won't find it in Caligula - in fact you won't find any of the first 10,000 words I wrote. They weren't wasted though, every word and piece of research I did brought me closer to the subject; to the people, the sights, the sounds and the smells - the atmosphere - of Rome.

Writing at the end of a 10 to 12 hour day was tough, but I stuck to it until my son got old enough to want to use the computer too. That was when I abandoned the car started a one hour commute on the train to and from work. That allowed me to up my output to between 1200 and 1600 words a day, and suddenly the mathematics of writing seemed a lot friendlier. 1600 words a day x 5 is 8,000 words a week. A novel is around 90,000 words. Working on the train for even two hours a day I could write a first draft in about three months. I was on my way.

I'll end my first blog here. It's going to take longer than I thought to get up to date. Hope you'll stick with me. It's been a rollercoaster so far and I think the best is yet to come.