So how did the golf go, I hear you ask?

Actually, it went entirely to plan. I only embarrassed myself moderately. Had one air shot, several scuffs and when I got the ball in the air it often went in the wrong direction. On the plus side, I hit two what I would class as good drives (in the air AND towards the hole), two chips that ended up a foot from the cup and earned the applause of my team mates, and I sank an eighteen foot birdie putt. 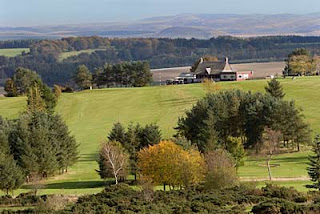 Jedburgh Golf Club, on the lower slopes of the Dunion Hill overlooking the town, is a wonderful setting. My fellow team members were three of the best amateur golfers I've ever witnessed in action; Harry Hogg, who used to stay three doors away from me in Allerley Crescent, his wife Pauline, the ladies club champion, and their son Connor, the youth champ. Team Hogg were unlucky enough to get me in the ballot when they could have had any of several members of the 1984 Scottish Grand Slam side, two former pro footballers or the local MSP. Young Connor hit the ball so far on the long par five that Gavin Hastings, who has a handicap so low that it's almost below freezing, called it obscene.

Thanks entirely to my playing partners we ended up just outside the prizes in fourth place. But it wasn't the winning that mattered, it was the taking part and raising money for the club, which is a wonderful asset to the town. It was a real pleasure to be asked and a bigger one to take part.

If you play golf and ever get the opportunity, do give the Jedburgh course a try. It's a glorious place, a real test and you're guaranteed a warm welcome from the very best of Border folk.
Posted by Doug at 09:58 6 comments:

I had an interesting afternoon with Stan, my agent, yesterday at the Cafe Royal in Edinburgh. Your agent's job isn't just about selling your book ideas for vast amounts of money (in your dreams), but also to encourage, boost your confidence and inspire you to greater efforts.

Stan does all these things really well.

Yesterday, they were filming some TV drama outside the pub. which seemed like a good omen. We talked about where I should be going next with my historical novels and he liked all the ideas I've come up with. I should have completed the first draughts of my next two books by the turn of the year  and I need to have something new to begin by around then. A lot depends on where the current trilogy is, which makes the paperback of Hero of Rome and the Defender of Rome hardback pretty crucial to my future.

He was also very complimentary about The Doomsday Testament (he's the only person outside the publisher who's read it). He thinks it's a great package that could really take off, which is what any writer likes to hear (see encouragement above). By coincidence, I'm reading the book proof of Doomsday at the moment and I think it feels like a cross between The Odessa File and The Da Vinci Code, which is a happy thought and one I'll nourish until it comes out on August 18!
Posted by Doug at 10:50 7 comments:

One of the best things about writing for a living is that you get to meet so many great people, at signings, book festivals, workshops and the like.

This month I've been invited to take part in a pro-celebrity golf tournament in my home town of Jedburgh, at the fantastic 18-hole course on the Dunion hill. The fact that I haven't picked up a golf club for about three years hopefully won't spoil my enjoyment of the day.

Judging by the competition, I suspect I'll be out of the prizes, unless it's the booby prize. The rest of the invited guests are just about all proper celebrities, with half a dozen former Scotland rugby players and footballers among them. And you just know that they'll be low handicap golfers, as opposed to hackers like me.

So on the 24th June, I'll be teeing off beside Messrs Gavin Hastings, John Rutherford, Keith Robertson, Finlay Calder, Peter Dods, Jim Leishman, Pat Nevin and Andy Lawrie. Radio presenter and rugby coach Gary Parker, who I know from my days in Melrose will be there, along with local politicians and musicians.

A little treat for fans who enjoyed Hero of Rome. This is the first page of the sequel, Defender of Rome, and anyone who read the first book will realise that all is not as it seems. 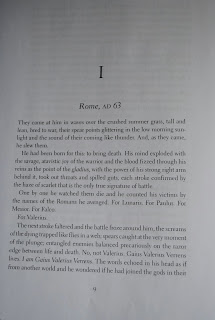 The proof read copy of the MS appeared in the post today. I now have a fortnight to make any last minute changes and give it a couple more reads while two professional proof readers do the same thing for the publisher.

The other day I came across an e-mail I'd written a year and a half ago about a pitch I was making for a crime book I'd just completed. It was part of my master plan for making a living as a writer and I was looking for a quick answer. The  book wasn't quite right, my agent came back to me and I made the alterations he suggested ... and forgot all about it.

The reason I know this is because I've just finished a long-intended rewrite of the first novel in that series, which I started in about 2006, and I was searching for the original synopsis. I think they're both great books, with fantastic main characters, fast paced and a real story to tell, but because of everything that's happened in between they've ended up on the back burner.

In a recent interview, I was asked what advice I would give to a writer looking to be published. I thought about it for a long time, but there really was only one answer: persevere. I should probably have added: always check your e-mails and never throw away an idea.

Since I made that pitch I've written Defender of Rome, The Doomsday Testament and I'm half way through Avenger of Rome, with an epic battle still to fight. That means Brothers in Arms and War Games will stay on the back burner for a while, but I intend to persevere until they're in print too.

One of the great things about interviews is that you find yourself listening to your own advice: for once!
Posted by Doug at 16:27 No comments: