I've just returned from a couple of invigorating days in Kidnapped country. The first time I read Robert Louis Stevenson's novel was forty-odd years ago, when I was about ten, but the last was less than a year ago, and the passage of time hadn't made any sort of dent in my enjoyment of the book. It's one of the ultimate adventure stories and about time someone made a decent film of it (with apologies to Michael Caine, the ultimate Cockney highlander). At its heart is the Appin murder, and it was to Port Appin in Argyll that we headed on Wednesday, undaunted by severe weather warnings and promises of blizzards.

Kidnapped is also a brilliant travelogue, cataloguing Scotland's wild places with vivid imagery as David Balfour and Alan Breck Stewart make their way from Mull to Edinburgh through the Highlands and the Trossachs. I'd always been captivated by those descriptions and I recalled them as we travelled north and west, through Callander and Balquhidder, Lochearnhead and Crianlarich and on, by the pass of Brander, with every turn producing a view to take your breath away and fill your head with words like 'majestic' and 'grandeur' and snow covered peaks with unpronounceable names passing by like enormous milestones marking the way.

Port Appin started out as just a speck on a map, but I doubt I'll ever forget the 48 hours we spent there, much of it staring out over the Lynn of Lorn towards the golden Isle of Lismore and beyond to the sunlit, white-capped vastness of the Morvern and Ardnamurchan peninsulas. We had a room at the Pierhouse Hotel, built around the old ferrymaster's cottage; the kind of place where, if you're fortunate, you can look out of your window and watch a cormorant drying his wings on an old buoy or see a seal playing in the shallows. The oysters came daily from beds around the island fifteen minutes away over the sea, and if you fancied lobster you could choose it from the creel dangling off the end of the pier. Bridge of Allan, where I live, is hardly a bustling metropolis, but walk the Appin woods and you experience a silence that's almost spiritual; a stillness that has the potential to either drive you mad or seduce you into staying forever. 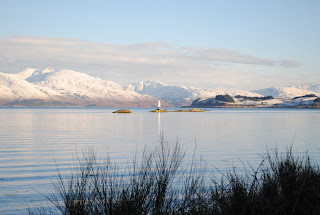 This year was always going to be a holiday at home kind of year, but I now realise it won't be a hardship, just the opposite.
Posted by Doug at 07:34 4 comments:

One step at a time

Jeff, who e-mails me occasionally about writing and books, asked me last week which has been the most difficult book to write and said he suspected it was probably the first one, where you put in the hard slog of turning out upwards of a hundred thousand words without any real hope of it ever getting into print.

His question made me look back at the motivation for writing what started off as The Emperor's Elephant and how things have changed since Caligula was published and again since I decided to try to make a living by writing full time. Each book actually creates a different mental and psychological challenge as opposed to the endeavour, time and imagination you put into it.

Firstly, I think Jeff's wrong. The first book is the easiest to write, because when you're writing it you're totally free from expectation: deep down you know the chances of anyone else ever reading it are as likely as winning the lottery. You can dream, but you don't have to prove anything to anyone except yourself. I wrote The Emperor's Elephant because I enjoyed writing, because I liked the subject, because I was pretty certain I could write a book of some kind and because I found that writing it provided me with the kind of escape that reading books has given me over the years.

When a publisher asked me to turn the first part of The Emperor's Elephant into what became Caligula, I had the motivation of proving to myself I wasn't just a writer; if I could pull this off I was actually on the way to being a novelist. Again, when the book was accepted there was the excitement of being part of a team and the pure adrenalin of knowing you were going to have a first book published.

Claudius, the second book was different, because now there was a weight of expectation which hadn't existed before. Claudius didn't just have to be as good as Caligula, it had to be better. I'd clawed my way through the glass ceiling and now I had to prove I was worthy of staying there.

A few months later came the pure exhilaration of a second deal to write three more books, followed immediately by the horrible knowledge that I was already behind schedule on the first one. I wrote the first forty thousand words of Hero of Rome on the train, knowing that I'd never finish it on deadline unless I went full time, and the next seventy thousand at home knowing that it had to be the best yet, because the rest of my life depended on it.

Now I'm sitting here with a new title on my screen - Defender of Rome - and a new set of problems.

Actually, Jeff, the answer to your question is much simpler ...

The most difficult book will always be the next one.
Posted by Doug at 06:20 3 comments:

I've had the opportunity to do a bit of reading for pleasure over the last couple of weeks, as opposed to reading for research, and I managed to get through quite a few books, including Hilary Mantel's Booker prize winner Wolf Hall. Once I got used to the slightly idiosyncratic use of the personal pronoun I really enjoyed her tale of Thomas Cromwell's life at the heart of Henry VIII's court and its portrayal of sixteenth century London. It did, though, leave me puzzling over where an enjoyable, well-written historical novel ends and an award-winning work of literature begins. What makes, for instance, Wolf Hall, a better literary novel than Robert Harris's Lustrum or Tracey Chevalier's Remarkable Creatures? For me, they're both the Booker winner's equal in creating a fascinating picture of remarkable people living in remarkable times.

Anyway, no-one was more pleased than I was to see a top book prize being awarded to a popular work of historical fiction, because, by and large, authors of historical fiction haven't had many prizes to aim at. So I was delighted to read this weekend about a major new prize being launched - and in God's own country too. The £25,000 Sir Walter Scott Prize for Historical Fiction will be awarded at the Borders Book Festival in June, from a shortlist of UK authors that will be revealed in March.

The Duke and Duchess of Buccleuch, whose family has a long association with Scott, are behind the award and are keen that the great author's name should be linked with such a prestigious prize. It's also a huge coup for the festival's livewire organiser Alistair Moffat and his team and another step towards ensuring that the Melrose-based event is one that nobody who is interested in books can afford to miss.
Posted by Doug at 08:07 2 comments: