It's time for the annual Jackson Enterprises end of term report. 2012 was a great year for me in a lot of ways. I published two novels and wrote two others. Avenger of Rome has probably had the best reviews of any of my books so far and I don't think there's any doubt that it's the best historical novel I've written. The Isis Covenant (James Douglas) also received a lot of praise and was undoubtedly a step on from The Doomsday Testament. If that wasn't enough I signed a contract to write another five books for Transworld, for which huge thanks to my former editor Simon Thorogood, whose faith in my ability changed my life.
On the events front, I was given a fantastic welcome at History in the Court and the Historical Novel Society conference in London and appeared on panels, with, among others, the wonderful Bernard Cornwell. I've done readings and panels all over Scotland and met some wonderful people.
The only downside was the cancellation of the Festival of History at Kelmarsh because of the flooding, but hopefully we can make up for that this year.
Going back twelve months, 2012 looked challenging, but I was confident things would work out. 2013 is going to be challenging for slightly different reasons. I have two books to edit - Sword of Rome and The Excalibur Codex, which will be out in the summer - two books to write from scratch, beginning in January, and I'm working on a rewrite of another at the moment which will hopefully be published next year. Oh, and I plan to put The Emperor's Elephant - the final part of the Rufus trilogy - out on e-book. It's also time to think about trying to get my characters on the big screen. I think Hero of Rome is probably the most filmable of my books. A story of doomed love, loyalty, courage, comradeship and sacrifice set against the background of a bloody insurrection. Great characters. Battles on an epic scale, but in a compact, almost claustrophobic setting, and the final heroic last stand. Rome's Alamo. If you have any contacts in Hollywood ...
A Merry Christmas and a Happy and Prosperous New Year to all my readers!


One thing I suspect every writer enjoys is when the padded parcel drops through the letterbox with the latest foreign edition. It's always great to see the different designs the publishers come up with and you can't help laughing at being reincarnated as Daglas Dzekson. 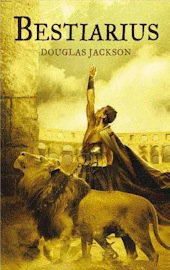 Caligula has been published in twelve languages (I think) including Italian, Spanish, Polish, Hungarian,  Serbian, Romanian, Portuguese and Russian. For a while in 2008 I was getting a new foreign deal every couple of weeks. In monetary terms they weren't huge, but it was flattering and exciting to realise that so many people in different countries would be reading the book.

Naturally, when Claudius came out I expected the same, but the world had changed, publishers weren't taking any chances and the foreign deals more or less dried up for a year or two, though they seem to be reviving now.

The thing about them is you enjoy the moment and then forget them.

But this week I received a lovely e-mail from a Spanish gentleman saying how much he'd enjoyed Bestiarius - the Spanish edition of Caligula, published by Ediciones B of Barcelona - and by complete coincidence I discovered a fantastic Spanish review of the book. The reviewer was amazed to have stumbled on this great unknown author and exhorted the publisher to get out there and promote the book. Exactly what you want to hear!

So when the latest royalty statement arrived I was very chuffed to see that Bestiarius is the first of my foreign publications to make a profit (albeit a modest one), and I'm hoping that the good senors and senoritas at Ediciones B realise that there's money to be made from the author's other four (and by common consent even better) historical novels. Onwards and upwards.

PS Some of you may have seen my message that I was abandoning the blog because Google had locked me out. Fortunately, my friend and webmeister Ewan has contacts in high places and the problem was resolved.
Posted by Doug at 01:12 1 comment: