A year ago I took the brave/mad/exciting decision to write full time and when I look back I wonder if I've done the blog and my readers justice. There's something about gambling everything on a dream that prompts a tendency to reticence, probably with good reason because your mood tends to fluctuate a lot more between wishful fantasy and confidence-shredding gloom. Now I feel I owe my fellow writers a little more insight into what it's been like to go it alone.

Hero of Rome was launched a year to the day after I left The Scotsman. It seems to be doing very well and Caligula and Claudius are both benefitting from its success, particularly Caligula. So how does it feel twelve months on?

In retrospect it was indeed a moment of madness when I left the paper, a heady brew of rash optimism and not quite reckless risk after nine years in an albeit high-stress comfort zone, driven by the new three book deal that begins with Hero of Rome. The economic climate couldn't have been worse, but the possibilities were limitless and it was a chance to walk through a door that might never be open again. I can honestly say I haven't experienced a single moment of regret.

I've been introduced to great people I would never have met, some of whom have become friends. I've appeared at the Borders, Stirling and Wigtown Book Festivals. I've been to jail twice and Saltcoats once. I've had time to write two books and come up with ideas for half a dozen more. I've seen more of my wonderfully supportive family in the past twelve months than I had in the previous five years and had the freedom to come and go as I choose after about twenty years of repetitive routine. 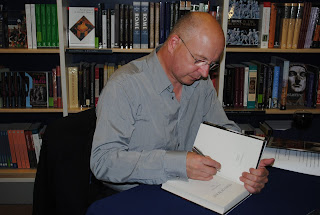 I've learned a few valuable lessons on the way that might be of interest if you're thinking of following the same path.

TAKE a deep breath before you jump. Looking back, I probably got carried away by the moment and the decision deserved a little more reasoned consideration.

BE prepared to lead the life of a Trappist monk, writing is an incredibly solitary profession. No little cosy chats with your colleagues to reassure you how well you're doing.

DO get yourself a proper writing space where you can be free from distractions.

REALISE that the two most important people in your working world will be your editor and your agent, in whom you must have absolute faith, because they are the foundations of your future and that of your family.

ACCEPT that your financial forecast will be wildly optimistic. A year down the line, that nest-egg looks very different in reality to what it did on paper. A little voice will whisper in your ear: Do you admit defeat with six months in the bank? Or three? Or do you go down to the wire?

IDEAS are your currency. Never throw any away. Even if it isn't accepted this year or next it may come good somewhere down the line.

BEWARE Facebook and other such social networks because they can have a corrosive effect on your capacity to work, but also embrace them because they can give you a great marketing platform.

FEAR of failure will be your constant companion but you can't let it dominate you.

ACCEPT that you will suffer Writer's Block at some point. I thought I was immune, but I wasn't and it was the most frightening week I've had so far.

CELEBRATE every triumph, try to ignore every setback.

RELISH the chance to begin each new book and new chapter, because others don't get the opportunity.

REMEMBER that it's all been worthwhile.
Posted by Doug at 10:38 1 comment: 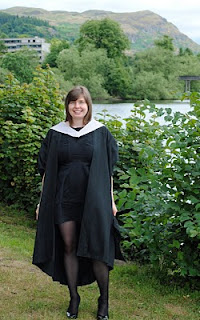 It was my daughter Nikki's graduation from Stirling University on Wednesday and I sat in the cavernous tennis hall along with my wife and several hundred other proud parents to celebrate her achievement.
As the long ranks of students marched onto the stage to be capped by the Chancellor, James Naughtie, I found myself trying to compute the combined intellect and effort that had gone into the four hundred or so degrees being conferred. We all laugh at the stereotypical student lifestyle, but I've witnessed the amount of hours and work she put in, the tears and frustration when things weren't going well and the pure joy and relief of a high mark. Whatever benefits they get from their effort are thoroughly deserved.

I was hugely proud when Nikki received her degree, but the moment was also touched by a certain sadness because it means she'll soon be leaving home, and, if I'm  honest, guilt. Why hadn't I ever achieved what she just had?

I've never felt handicapped by the fact that I left school with six of what were then called 'O' levels. When you're in a working environment and there's a deadline to hit, nobody's bothered if you went to university as long as you put in the hours and you're good at your job. I could probably argue with some justification that, at the time, in the early 70s, people from where I came from, with my background, just didn't expect to go to university. Then again the sixteen year old me was hardly a paragon of work and ambition. As it is, I've been incredibly fortunate in my career and my life. But just lately I've been wondering: what if?

Would I be a better writer and storyteller if I'd been subjected to the intellectual rigours of university? Would I have written at all? I suppose the answer is that I'll never know and maybe that's for the best.

One thing I don't need a degree to work out: thunderstorm + Victorian house = leak in roof.