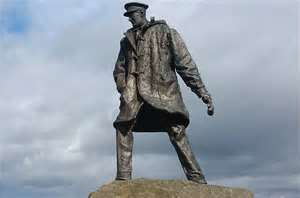 I took a walk from Bridge of Allan up to the Stirling monument, which looks out towards the Highlands from a ridge on the Doune Road and commemorates Sir David Stirling, founder of the SAS and a very British hero. The land it stands on is part of the Keir estate his family once owned, but later sold to a Saudi Arabian sheikh.

The walk wasn't a familiar route, but took me round the estate walls on the Carse of Lecropt and then up through broken farm and woodland to the Doune-Bridge of Allan road. I saw a couple of healthy looking deer, a few buzzards and a beautiful red kite. There were also, despite the freezing weather and intermittent snow flocks of Yellowhammers and Chaffinches in the hedgerows.

The monument is an impressive bronze that stands nine foot tall on top of a stone plinth and the subject wears an army duffel coat and has binoculars hanging on his chest, but Stirling's true memorial is the unit he founded in 1941. L Detachment Special Air Service bore little resemblance to the elite SAS squadrons we know today. Stirling was the kind of Walter Raleigh swashbuckler who was probably born a hundred years after his time. He'd been commissioned into the Scots Guards, but wangled himself a transfer to 8 Commando because he wanted to see some action. Operations in North Africa convinced him that the Commandos were too large and cumbersome for the kind of raiding that was required. He managed to convince General Claude Auchinleck that a 'special force' could do the job better and was given permission to recruit six officers and sixty men.

Initial operations were unsuccessful, even disastrous. On the first raid, Operation Crusader, he lost 42 of his 61 men after the air drop went wrong scattering men all over the desert. Only the strength of will of its charismatic commander saved the SAS. From now on they would go in by land. Stirling often led the hit and run operations personally, planting bombs on enemy warplanes and raiding supply convoys. His luck ran out in January 1943 when he was captured by the Germans and eventually ended up in Colditz Castle. In the 15 months since he had founded the SAS his men had destroyed two hundred and fifty enemy aircraft, blown up dozens of supply dumps and wrecked railways. Field Marshal Montgomery described him as 'mad, quite mad' but acknowledged his worth as a soldier.

After the war, Stirling's reputation was undermined by becoming involved in mercenary groups and shadowy organisations aimed at undermining the trade union movement. An inveterate gambler who once lost £150,000 in one night, his biggest gamble was probably his plan to stage a coup as Britain drifted what he believed was too far to the left in 1975. Fortunately for his country and his memory he was less successful as a coup leader than he was at organising raids against the Nazi supply lines and the attempt fizzled out.

Coping with (an author's) split personality


One of the most frequent questions I'm asked is how I manage to jump about between being Douglas Jackson and James Douglas, my alter ego who writes mystery thrillers like The Doomsday Testament, The Isis Covenant, and now, The Excalibur Codex.

The answer is that I don't - at least not normally - I take three or four months to write a historical novel at the start of the year, take a rest, then morph into a thriller writer for the next four. Ah, I hear you ask, so what do you do in the other four months, you lazy/lucky so and so? Well, I do what I'm doing at the moment, which is juggling between not two books, but five.

I've just started writing Enemy of Rome, the fifth in the Valerius Verrens series, which takes place in the second part of the Year of the Four Emperors. The fourth in that series, Sword of Rome, ending with the First Battle of Bedriacum, is now at the copy-edit fact-checking stage (at least I haven't heard if there's a problem with the editor's main rewrite).  The Excalibur Codex is with Simon, my editor, and he'll be getting back to me in the next couple of weeks with suggestions on how to improve it. In all, the edit, copy-edit and proofreading of each book probably takes at least another month each, and means jumping in and out of the work in progress like a Jack-in-the-Box.

The long-running saga of my crime books continues. Stan, the agent, has the latest version of War Games, which is now the opener, and I was hoping it would be out there by now, but that appears to have been wishful thinking.

And I'm still dipping into The Emperor's Elephant of an evening, which I hope to persuade my publishers to put out as an e-book, but I now realise isn't quite up to the standard of my current work. I don't have time to do a full rewrite so am I justified in publishing the book to finish off the Rufus story, even though it might look like a step backwards? Answers on a postcard ...

Oh, I've put together the synopses for a new series of four books by James Douglas, for when the possibly too likeable, but very capable, Jamie Saintclair has run his course (which may be some time yet).

In the meantime here's a precis and a sneak preview of the cover of The Excalibur Codex. The copy-line/subtitle will change, and there might be a tweak in the design to put it at the bottom of the cover, but you get the picture.

For countless generations the sword had been kept hidden away ready for a time of need, but not hidden well enough because on a warm July night in 1937 it vanished to be swallowed up in the storm clouds of war that would soon engulf the world.

In the spring of 1941 twelve SS generals gather in an East Prussian castle to re-enact an ancient rite and call on the spirits of Europe’s mightiest warriors to aid them in the coming battle in the East. At the heart of the ritual is a pentagram formed by five swords. One of them is Excalibur, the mythical weapon pulled from a stone by King Arthur.

2010 - ‘My time is close, but I cannot pass without revealing what I saw and, perhaps, making amends for what I have done …’  Art recovery expert Jamie Saintclair laughs when he reads the codex to a German war veteran’s will and the strange ritual it describes. But arms collector Adam Steele, is convinced enough to enter into a binding agreement that if Jamie can find the sword, Steele will pay a small fortune for it.

The hunt for Excalibur takes Jamie from Germany to eastern Poland, a deadly encounter in Hitler’s Wolf’s Lair and the discovery that the castle has been destroyed down to the last stone. The only clue to the sword’s fate is the strange tale of a partisan unit murdered by its own commander.

With a team of international assassins on his trail and the distinction between friend and enemy a blur, Jamie finally makes it back to a Britain under siege, where the last piece of the puzzle falls into place and he discovers that the line between obsession and madness is gossamer thin.