The memories that never leave you

Somebody was asking me the other day how I came up with the idea for my thriller The Doomsday Testament. I said that I just sat down one weekend, thought of a long forgotten artefact with world-changing potential, created a suitable myth around it set in a time I was interested in, then gave my character, Jamie Saintclair, the job of solving the mystery of where it had vanished to.

I now realise that isn't true.

The Doomsday Testament is actually about the secrets that men keep, even from their families. For years, ever since I was little, I'd asked my father that age old question 'What did you do in the war, daddy?' and he'd just smiled. Only gradually did he reveal that he'd been in Malaya during the Emergency (they were too coy to call it a war), but not as one of the famous Virgin Soldier conscripts, he'd had a great time and the only injury he'd suffered was on the football field.

It wasn't until he was in his seventies that I learned what really happened. At that point, he seemed to need to recall what had been the most traumatic and vivid time of his life and pass it on to me, his eldest son. In the late 1940s and early 50s he'd served one tour of duty with the Seaforth Highlanders, mainly in the uniquely dangerous position as platoon scout, patrolling the Malayan jungle looking for the enemy, CTs or communist terrorists. He'd killed and seen men, including his friends, die, some of them in terrible ways. But when he returned to Britain he immediately asked for a transfer so he could go back to Malaya on a second tour. This time he had to watch as his comrades in the Gordons went through the same deadly learning curve he'd already experienced, officers shunning the advice of a mere private. It culminated in one of the deadliest ambushes of the war, with a British major, a captain and a lieutenant killed along with many others.

He kept all this bottled up for more than fifty years, but I doubt that never a day passed without him remembering one or other aspect of that time in the jungle. When he did eventually speak, it was obvious those events had changed him and that the mental scars they'd caused still remained. A few months before he died last year he left me a history of his life in about 30-odd tight written pages. 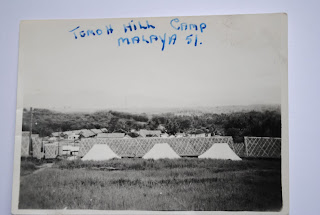 I didn't see that 'journal' until many months after I'd come up with the idea for The Doomsday Testament, but the central theme of my book is a young man's journey of discovery through his grandfather's diary of the last days of World War Two.

And my point is? I don't really know. I just thought it was worth mentioning.
Posted by Doug at 08:00 No comments:

No news is good news

As I looked out the window today at the rain bouncing six inches off the pavement I was reminded of Juliette Mills in Avanti, telling Jack Lemmon how pleased she was to be in Italy because the British summer was two weeks in May and a week in June.

Simon, my editor, liked what I'd done with The Doomsday Testament, which was a relief, and I took a couple of days off during our few days of summer last week and drove up to Dunkeld, the little Perthshire town on the River Tay. It's a beautiful place, packed full of history and with gardens and walks along the river where I watched a fisherman catch a salmon (a rare event in my experience) and then lose it (which isn't). Earlier, we'd driven a couple of miles out of town to the Loch of the Lowes nature reserve where you can get incredible views of ospreys at the nest there. Once rare, you can now see these beautiful birds from the Highlands to the Borders. I once watched one swoop to take a trout from the Forth while I was fishing a couple of miles from my house and it completely took my breath away.

One of the most pleasant aspects of the past couple of weeks has been to sit back and watch all those big news events from a distance, instead of being in the middle of a freaked out newsroom and about two steps from a nervous breakdown.

The Royal Wedding? Managed to avoid it entirely, there's only so much oily sycophancy a man can take. Osama Bin Laden? How could the White House make such a hash of the aftermath? If you're going to commit state-sponsored murder what's the point of making feeble excuses about it? The Scottish elections? Utterly compelling. I've met Alex Salmond a couple of times and he's a charming man with an ego the size of Edinburgh Castle. Giving him an electoral majority is like putting a chocaholic in charge of a sweet shop. Mark my words, it's going to be messy.

So now it's back to Avenger of Rome and head down for a couple of months. Valerius ships out for Antioch and a date with destiny in the Armenian mountains. Can't wait to get there.
Posted by Doug at 04:43 1 comment: