Over the past couple of days I've been keeping an eye on a literary soap opera that perfectly illustrates the power of the internet to make or break a budding author.

On March 16, a blog called BigAl's books and pals, which specialises in critiques of independently published e-books, reviewed The Greek Seaman by a British-born author called Jacqueline Howett. I haven't read the book, but the review seemed fair enough. Al's conclusion was that it was a good story marred by spelling and grammar errors and he awarded  it two stars.

One of the first things I learned as a writer, largely thanks to putting my early stuff up on the Youwriteon.com website, was that you have to roll with the punches. There's always the temptation when you get a review that is painful or just plain wrong to hit the keyboard and tell the reviewer why he's so mistaken. You don't. You take a deep breath and start the next paragraph.

Two days later she posted three five-star reviews from Amazon that said just how good her book really is. Perhaps it's a measure of her innocence that one of them came from someone with the same surname.

Her counter-attack got up the noses of some of Big Al's 606 followers, who pointed out that he was only giving an honest opinion. But Jacqueline still didn't let up. Fast forward a week and we're into a debate about which version had been reviewed and the author is upbeat that all the attention has increased her sales. If she'd just walked away then, maybe it might have worked out, but she always had to have the last word, which even more unfortunately turned out to be F*** Off!

By now Al's pals had alerted their friends and the debate had gone viral. Everyone knew about Jacqueline and wanted their say. The blog had 300 comments before Al, who comes out of all this pretty well, closed the gates.

But you can't shut out the internet and the pack had scented blood.

The battle moved to The Greek Seaman's Amazon page and a feeding frenzy in which the book was dismembered, her reputation as a writer destroyed and ultimately buried under an avalanche of ill-informed, sometimes vicious 1-star reviews (50-odd at the last count) from people who had evidently never read the book, and who I doubt have ever put in the hours of effort required to write one themselves, It was horrific to witness, but fascinating in the way of one of those wildlife documentaries where you watch the baby zebra come down to the waterhole where the crocodile lies in wait.

What do I think?

Jacqueline shouldn't have risen to the bait, but there's something sickening about this pack mentality and the way the internet allows faceless, nameless individuals to tear apart someone who has at least had the guts to create something and put it out there. Get back to the keyboard, write another book under a different name and think Amanda Hocking, but, please, this time get a professional editor to take a look at it before you publish it.
Posted by Doug at 01:42 6 comments:

A face that launched a thousand quips

Some people collect stamps or old vinyl records, I collect faces. Not, I hasten to add, in a Hannibal Lecter kind of way, but so that I have a bank of characters for future books.

On the trip to London the other day, I picked up half a dozen, male and female, and all shapes and sizes. So if you were on the 10.30 Edinburgh to King's Cross and saw a furtive looking bloke intermittently staring at other passengers and writing in a black notebook, don't worry, that would be me.

It's not just about physically describing the features. Eyes are OK, because there are any number of colour permutations, and, to a certain extent, your eyes are the treasure chest of your secrets, but noses, though (see above) they come in all shapes and sizes, aren't all that interesting to record, and ears are large, small, possibly delicate, and occasionally cauliflower, but that's about it. Chins? Don't get me started about chins. No, the secret, and the greatest test for a writer, is to use the face as a window into the soul of its owner.

I've had a couple of so-so reviews of Hero of Rome lately, the kind of thing that you're always going to get if a book's selling well, because you know you're never going to please everybody. But the odd thing about these reviews is that they both took me to task about the same thing. I'd made the lead characters too handsome, intelligent or beautiful. In an odd way its something of a compliment, because I always intended Valerius to be strong and likeable. Maeve had to be striking enough to immediately grab his attention and draw him across the cultural divide. One of the fun things for me is creating characters who are my exact opposite, which is why Valerius is tall and clever, with sculpted features and hair he can run his fingers through, not short, bald with a head shaped like a baked potato. So I make no apologies for taking the decisions I did. My question is: when did it become a crime to put good looking people in a book?

The face I liked best on Thursday and Friday wasn't on any of the pretty girls or handsome blokes. She had a heavy forehead, a strong jaw and a nose that took no prisoners, in fact features that were quite mannish. Yet the moment she opened her mouth to speak she turned into a different person: it was like witnessing base metal turn into gold. She seemed to caress every syllable and turn it into a musical note, and it was only when you heard her speak that you noticed that the beauty of her voice was matched by her eyes. I don't know her name, but I suspect she'll be appearing in a novel near you quite soon.
Posted by Doug at 12:31 2 comments:

I've spent the past week going through the copy-edited manuscript of Defender of Rome. The MS is about three and a half inches thick and made up of 338 pages of A4 that contains, at the last count, around 110,000 lovingly crafted words chronicling the continuing life of Gaius Valerius Verrens, hero of Colonia, after his return to a Rome ruled by an ever-more erratic Emperor Nero.

There are a lot of vital stages in the production of a book, but the copy-edit is right at the top. It's a process that every writer has to go through, and for some it's a chore, but I thought it was worth giving you an idea how it works. 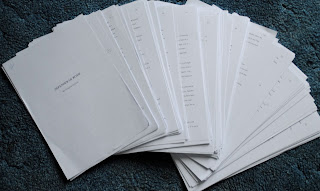 For me it's always a time of part-pleasure, part-frustration. The pleasure comes in knowing the book is another step closer to becoming a reality, and the fact that your character has developed in ways you would never have imagined when you wrote the first novel. The frustration is that I've had to drop my next book, Avenger of Rome, half way through, and that I'm having to face up to the numerous mistakes I made writing Defender.

My copy-editor, Nancy, has a wonderful eye and the Classical education I wish I'd had. She came up with twenty major queries or suggestions, which isn't bad in a complex story of over 100,000 words, and an average of about three minor tweaks (cuts, improvements or corrections) a page, every one of which improves the book in some way. While I checked what she's done (was I tired when I wrote that the world 'spun on its access' or just stupid?) I made my own corrections etc, which amount to a 3,000 word document affecting around 250 of those 338 pages. I'm never sure whether to be pleased I'm able to make such a difference even at this late stage, or embarrassed at the amount of work I've had to do on something I once thought was the finished article. Again, every change should be a further improvement in quality, whether its historical accuracy or the standard of the writing. Bear in mind that this is after my editor, Simon, has taken the novel through a similar process, focussing on the storyline and the writing rather than the facts, and I've probably checked it six or seven times already. 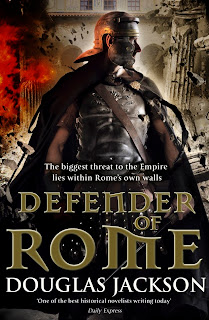 I'll have a chance to give it at least one more read through before I head off next Thursday to do an event with Manda Scott at the Transworld LitFest just outside London, and I already have another few changes in mind. After that, there's only one more stage I'm involved in, the final proof read, and the next time I see it, it will look like this.
Posted by Doug at 05:23 7 comments:

Reviews: the dark side

Just a short rant on the subject of reviews again. I was interested in a new book by a Scottish writer that has barely been out for a couple of days and I took a look to see how it was doing on Amazon, as one does when one should be writing.

It was performing pretty well for a debut novelist, which is encouraging for everyone. But I was surprised to see that barely a day after it was out it already had three reviews, all of them five stars, all of them raving about the book and the writer, and all of them written on the same day. The opening lines read:


The first was by someone who had only ever written a single review, which is always a bit suspicious, but it was the second and third that really got my hackles up. The second reviewer had written seven reviews. Every single one of them was five stars, with not a single flaw to be found in any of the books, and even more incredibly every single book had been published by the same Scottish publishing house. Lo and behold, the third reviewer had written thirteen five star reviews for books by the same publisher as reviewer two.

I think we get the picture. What really annoys me is that I suspect this is a very good novel, by someone who will be a very good author, but I'll never know because I'd never buy a book that seems to be being 'promoted' by something that's the publishing equivalent of a Nigerian inheritance scam. It demeans the writer and it demeans her work and most of all it demeans the people who log on to Amazon expecting to see an honest assessment of the product.

They're our readers and our customers and they deserve better.
Posted by Doug at 06:42 10 comments: