Call it hubris. Call it comeuppance. Call it the little man on the back of the Emperor's chariot saying 'You are only human'. Whatever you call it, it happened.
After crowing about last week's word output, I'd been working for about three hours today when my Mac ate my entire 51,000 word book. Hit save, it hangs up, then it crashes. Pages has had a failure and been forced to close. Mostly, you lose a couple of pars. This time Pfffft and the file disappears from the desktop. Search all you like, but it is no more. This is the second time, but I'd learned my lesson and I'd backed up my backups and most of my work was saved.
Suffice to say, I didn't do quite as much today as I expected.
We have a saying in the Borders: What's for ee, u'll no miss ee. Next time I'll keep quiet!
Posted by Doug at 12:26 No comments:

When Caligula was first published, I did an interview with David Robinson from The Scotsman and he teased a lot of very good information out of me, some of which didn't get into the newspaper. It came back to me this week when I noticed a phenomenon that's happened at some point in all my books. It's something that might be interesting to other writers, especially those on their first novel

I'm now on my ninth: five published, one on the way to production, one being written and two crime novels currently looking for a good home. The one I'm working on is The Isis Covenant, a follow up to The Doomsday Testament. A couple of weeks ago I was struggling with it, not certain whether I was in the right place or going in the right direction. The advice I always give other writers is that if you have a problem, just keep writing and you'll eventually write your way through it. So that's what I did, but I had a difficult couple of weeks.
The way I explained it to David was that writing a book is like going on one of those long distance walks in the hills where you plan to tackle two or three Munros. You make a start and you're full of beans, then you come to the long climb to the first summit and all you can see is what's directly in front of you. You're groping your way forward one step at at time and progress is slow. Eventually, though, you reach the top and the view ahead is clear, a glorious panorama that stretches for miles ahead. Suddenly everything is worthwhile and you're racing, you know exactly where you're going and how you're going to get there. 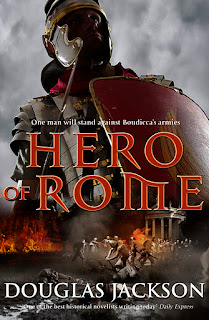 I realise now that all I was doing two weeks ago was learning exactly what the book is about, working out the strengths and the weaknesses. Two weeks ago I was probably averaging two thousand words a day - way short of my usual daily target of three thousand - and struggling to do that. This week I wrote an entirely new opening chapter so the book now starts with a bang that increases the pace of the whole first quarter. In five days I wrote twenty thousand words, which is probably my best weekly output ever. No doubt there'll be another Munro to climb before I'm done, but the view from the top makes it all worthwhile.
*The paperback of Hero of Rome came out two weeks ago after quite a big gap, but it looks as if the wait was worthwhile. It sold 1300 copies in the first week in Asda alone and this week it popped up in the Top 10 historical novels at Waterstones. Transworld have ordered the first reprint. A great start and thanks to everyone who went out and bought it!
Posted by Doug at 06:52 No comments:

Dare to be different

As writers we're always looking for the next big thing. The next Harry Potter. The next Da Vinci Code. The next Sharpe. That mega-bucks super-seller that will catapult its author to literary stardom and have Steven Spielberg knocking at the door waving his chequebook.
Of course, these things are entirely arbitrary. Even if you write a brilliant book or create a brilliant character, there's no guarantee that it'll be an instant success. There's also the undeniable fact that if you create something different, unique and innovative, you'll have a harder job selling it to a publisher than a more commercial, mainstream book with a guaranteed audience. Publishers are much more risk averse than in the past, and with good reason.
Cast your eye across genre fiction lists and you'll find that it's actually very difficult to come up with something that's unique. When I started writing Caligula sometime around 2004 (it was a project then, I didn't dare call it a book) I had no idea how crowded the historical fiction market was. Deep down I wanted to be the next Bernard Cornwell and I knew the name Conn Iggulden. I'd never heard of a guy called Simon Scarrow or read any CJ Sansom. I had no idea that at about the time I sat down and wrote the first sentence another half dozen excellent writers were doing the same with books that would become The Forgotten Legion, Warrior of Rome, Ship of Rome, Gladiatrix and the Empire series. Or that my old mate Bob Low, from Daily Record days, had already had his first Viking novels published and that Giles Kristian was about to follow in his wake. Caligula in its original form actually covers the same timescale as the early Macro and Cato books and Manda Scott's Boudicca series. If I'd known that at the time I probably wouldn't have dared write it.
At the beginning of 2010 I decided I could write two books a year and I put together some ideas for the next big historical thing. One of them was a five or six book series on the English Civil War with a character I thought could well be the new Sharpe and with each culminating in one of the major battles. It really was a great idea, and unique, or so I thought. My editor loved it, but about two weeks earlier the publishers had been presented with an idea for a civil war series with a character who could well be the new Sharpe, etc. etc. So in 2012, it'll be Giles Kristian who begins the journey to Marston Moor and Naseby, not me, and he'll make a brilliant job of it.
Anyway, I have strayed from  the point, which was to celebrate a US publishing deal for a great writer who truly dared to be different. Guy Saville created an entire alternative Africa ruled by the victorious Nazis for his book The Afrika Reich, based on plans that were actually formulated under Hitler. It was an idea so innovative that at first he struggled to find a publisher, but once it was in print his perseverance paid off and it's been a huge success. Now major American publishers have thrown their considerable weight behind it, and that success is about to be deservedly replicated on the other side of the Atlantic.
Posted by Doug at 08:38 3 comments:

That's what chums are for

I tend to steer clear of politics in the blog, although I'm as exercised as anyone by the continuing idiocies of our political masters across the whole spectrum. My excuse is that this isn't about politics, it's about standards and even use of language.

And so to Liam Fox. The interesting thing for me in the last few days is the number of Tory backbench MPs - and there'll be those in the other parties - who appear to genuinely believe he's done nothing wrong. Yes, his chum who at one point lived rent free at the state's expense in the flat they shared, set up a health consultancy at the same time he was Health Secretary. Yes, the same chum miraculously changed his area of expertise to defence at the very moment that Dr Fox became Defence Secretary, but that's what chums do. Chums jet all over the world and sit in on sensitive business meetings with heads of state and high-ranking military officials (it's not yet clear who paid for the jets, but it'll all come out in the wash). Who hasn't got a chum who'd accompany him on 18 trips abroad, to Dubai, and Washington, and New Zealand and Sri Lanka? After all a chap needs someone interesting to talk to when he's stuck on a plane with all those boring civil servants and defence contractors.
Who cares that everyone outside the tranquil and economically independent village of Westminster thinks that, at best, Liam's chum Adam has been living off his back like an ever-expanding leech? And that Dr Fox has been a willing host to his blood-sucking best-man? All that matters is that Liam is one of us and has done a fine job making the armed forces more efficient, on the Greek model. Why, he even set up his own charity ( 'to establish, and develop ... a network of like-minded conservatives in politics, business, journalism and academe on both sides of the Atlantic' - Who knew the definition of charity was so broad?) with his chum, Adam in charge.
And of course, Adam didn't benefit directly from all this networking.
Liam:  I am absolutely confident that he was not dependent on any transactional behaviour to maintain his income.
Interviewer: You what?
Liam: He's got his own money.
Interviewer: How do you know?
Liam: Because he told me.
Interviewer: That's all right then.
Who wouldn't be proud to have a chum like that?
Posted by Doug at 01:29 No comments: