Take a walk on the wild side

A nice day for getting the wellies out and heading up to the woods behind the old hill fort where the king's grave is. Beautiful sunny afternoon with a touch of winter in the air, but the wellies were definitely a necessity thanks to the mountain bike vandals who've churned all the paths into a muddy swamp.

This is a great time of the year for seeing things that are a little different. A flock of bullfinches feasting on the seeds among the dead nettles; long-tailed tits hanging upside down from the branches of a silver birch; woodcock and snipe exploding out of the flattened bracken and whipping away low and fast like mini-Meschersmitts. And of course, there are the old favourites; the pheasants hiding away from the guns on the estate over the other side of the river; an enormous buzzard that flapped majestically away accompanied by an escort of shrieking crows; the big roe deer that I caught sight of bounding down the hill through the trees that naturally didn't linger long enough to get a decent picture of.

The walk reminded me that I haven't been getting out enough lately. Hopefully that will change this week when I reach the end of the first draft of The Isis Covenant, but the editor's rewrite of Avenger of Rome is just around the corner, so we'll see.

Take forty odd talented creative types, put them in a room for two days, add a soupcon of direction, a pinch of encouragement and stir occasionally and what do you get? Well, a lot of laughs and mad ideas for starters, but to really get the best out of this dish you have to allow it to simmer for another five or six months.

That, in a cooking pot, was 360 Narratives, the two day get together I attended at the Barcelo Hotel in Stirling, hosted by the super-efficient Claire and Fiona from Playwrights' Studio Scotland, with a little help from Creative Scotland, and brilliantly marshalled by film maker Grant Keir. The idea was to bring people together from across the arts spectrum and get them to think about working together to create new and innovative projects. This is just the first step, with a residency to follow next March when the writers, screenwriters, playwrights, graphic novel designers and games developers whose projects have the most potential will be given the time and support to work together to begin making them a reality. The brilliant Phil Parker got the ball rolling with a clarion call to find a place in the new creative universe that's opening up all around, and urging people to collaborate with whoever was needed to make it work. Short films that can make a fortune on the internet, simple games that hit the right spot, interactive e-books that cross the divide between film, game and novel, films that can be created using a mobile phone. There's a market for them all. I'd never thought of any of them, but when he told his audience 'Story is the heart of everything' I realised that new doors are opening for writers everywhere.
I met some wonderful people, had my mind opened up to other ways of looking at the writing world, and was enthused, invigorated and finally left completely exhausted after two days of brainstorming that left most of us looking like wet dishrags, but feeling as if we'd really achieved something. When I started, I had no idea I was going to end up standing in front of about fifty people singing a folk song about a mad-eyed Manga warrior dying in a hospital to the tune of Hotel California (I can still hear it, make it go away). The fact that it took the place by storm and won the Genre, Location, Platform pitching competition was all down to my talented scratch team of Tracey, Alton, Fiona and Jessie, who entered wholeheartedly into creating something from nothing in twenty minutes and then had what it took to make it work (Having just seen the video, please excuse the poetic licence). Every one a trooper!
My wife almost had a fit when she saw Speed Dating on the agenda, but by the time I'd spoken to forty people for two minutes at a time over an hour and a half, trust me I wasn't fit for anything.
I won't be one of the collaborators who get together next year, because I have other plans and Valerius is about to march into his most dangerous fight yet, with enemies on every side, but it opened my eyes to a whole new world, and showed that a writer with imagination, talent and commitment need never be idle.
Posted by Doug at 16:03 No comments: 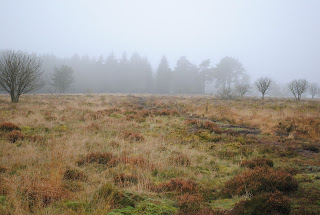 Remembrance Day fell on Sunday the 13th this year, which, by coincidence, is also the anniversary of the Battle of Sheriffmuir, one of the pivotal battles of the 1715 Jacobite Rising. Every year on November 13, members of the Clan MacRae gather to commemorate the occasion and remember the fifty clansmen who fell, holding the Jacobite left wing and dying to the last man.

Sheriffmuir is on the hill behind Bridge of Allan and Dunblane and it's become something of an annual event for me, a chance to catch up with my friend Jimi the Piper, a proud MacRae who provides the music at the event every year and former colleague from my weekly newspaper days.
Sheriffmuir can be a bleak, forbidding place, all heather and peat bog, and dark evergreens, but as a piece of land where men fought and died for their principles, a perfect spot to remember the dead of conflicts before and since. The MacRae historian gave an overview of the battle. How the Jacobites, led by the Earl of Mar, a man who would have been out of his depth commanding a Sunday school picnic, were on their way south to link up with a second Jacobite force, but had been met by Hanoverian troops commanded by the experienced and battle-hardened Duke of Argyle. The Hanoverians were outnumbered, but were a cohesive fighting force, those fighting for the Stuart cause were clansmen; warriors who knew how to fight, but next to nothing about the art of war. When they met, it was a tale of two flanks. The Hanoverian right overlapped the Jacobite left and the MacRaes died where they stood. On the Hanoverian left, the exact opposite happened and the Government troops were forced back towards Dunblane. The next day, Argyle, thinking he was beaten, but determined to fight again, took the field only to find that Mar, with victory his for the taking, had withdrawn back towards Perth.
Two hundred men, Hanoverians and Jacobites, still hold the ground at Sheriffmuir, beneath three great mounds of peat.
During the two minutes silence, I thought about those men lying forever on this windswept hill, and my grandfather, Johnny Gordon, who left part of his nose and most of his friends on another bleak hillside, on 12 July 1915, when three hundred men of the Kings Own Scottish Borderers from Hawick, Jedburgh, Kelso, Galashiels, Selkirk and Melrose were killed on a single day at Achi Baba in Gallipoli. And I thought of the young men, courageous and professional, now fighting and dying among the poppy fields of Afghanistan, for, it seems to me, even less purpose.
Posted by Doug at 07:33 2 comments:

A bird in the hand

Just a short post today with lots of pictures. My daughter Kara and I had a fantastic morning out at the Phoenix Falconry centre near Gleneagles, a birthday gift from my kids. Falconers Adrian and Steph gave us a wonderful insight into the world of raptors as we flew, among others an African Eagle Owl, a rare Caracara from the Falklands, a north American Buzzard that was actually an eagle, and an enormous Bald Eagle called Pilgrim. Passionate, professional and packed with interest, they ensured a memorable day in a wonderful location.
We were hugely impressed with the whole set up. I'd recommend it to anyone and definitely go back, maybe next time to go for the Walk on the Wild Side, when you fly the birds to catch their own dinner! 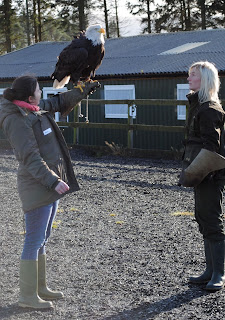