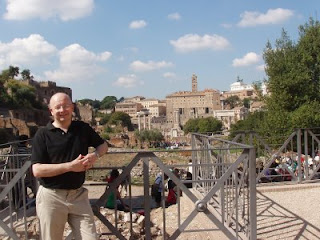 I've just come back from a research trip to Rome and am once again left marvelling at the wonderful, vibrant city it is: the breathtaking history, stupendous architecture, the astonishing prices, the miriad opportunities to be ripped off and the generous, hospitable Romans who entirely offset the last couple of observations.
It's my third trip to the Eternal City and in the last year it seems to have changed - for better and worse. Worse is the fact that you now have to pay to walk in the Roman forum, one of the world's foremost heritage sites, a place of pilgrimage for anyone interested in Roman history. Much of the action in Caligula takes place in, around and under the forum and the two hills which dominate it; the Palatine and the Capitoline. For me, ghosts walk here; the ghosts of Emperors and senators, gladiators and animal trainers, beggars and merchants, and the fact that you now have to queue up to buy a ticket and walk through a turnstile has somehow devalued it. Sure, it makes economic sense in a country which is as big a basket case as our own to cash in on one of the planet's greatest attractions, but the romantic in me thinks it should be open to everyone and not just to those prepared to pay 12 euros and be out by 5pm.
On the plus side, there seemed to be about a tenth of the visitors this time - although most of the others appeared to be queueing up to get into St Peter's at the Vatican. I also get the feeeling there's less traffic in the city centre, though after a couple of taxi trips I have nothing but respect for anyone who takes to the roads, especially around the Piazza Venezia.
One of the most amusing pastimes in Rome is to find yourself a little pavement cafe and watch the herds - or should that be flocks - of tourists straggle by, tormented by heat and thirst and always led by a matriachal/patriachal figure waving an umberella, a rolled newspaper or one of those roses the conmen keep thrusting at you for 'the pretty lady'. If you're particularly fortunate you'll be in a very narrow street and two of them will come along at once, in opposite directions, like two trains meeting in a tunnel. At this point I have to confess that I once visited Rome from a cruise ship and followed the umberella like a love-struck sheep along with the rest. Never again.
During the trip I stumbled upon the Emperor Nero's Golden House, the Domus Aurus, but unfortunately they were conducting an archaeological dig and I couldn't get inside. Nero and his sidekick Seneca will have a fairly major part to play in book three of what I still think of as The Emperor's Elephant trilogy.
My friend Ewan has shown me the template for the website and a very classy affair it is too. It'll have an in-depth biography, synopses and background on the writing of the two books so far, a pictorial section on Caligula and Claudius's Rome, a link to this blog and many of the historical sites I used to research the books. Hopefully it will also allow me to interact more closely with my readers. I've had another couple of reviews. One on Amazon, three stars but containing a lot of positives, which ended with the soul-destroying 'this won't set the world alight, but it's a good read'. It's always good to have an objective opinion though, so if anyone is thinking about putting in a review, good, bad or indifferent, please do. The other one was, interestingly, for an e-book version of Caligula and read, in its entirety, 'a good read'.
No news yet on the latest rewrite of Claudius. Simon is off to the Frankfurt Book Fair, which caused much excitement for me last year, but didn't deliver as much as I'd hoped. Still, another year, another book. Who knows!
Posted by Doug at 05:53 No comments:

One of the greatest pleasures of having a book published is when people you barely know or haven't met for twenty years come up and tell you what a fantastic read it was. It happened twice over the weekend when I was at a birthday party down in Jedburgh. A girl who was in my class at school and who I'd never have tagged as a historical fiction fan told me she loved Caligula, and couldn't wait for the follow up to come out. It was also very clear that the people in my home town are genuinely proud of what I've done, which puts the thing in some sort of perspective. I had the same thing in figures today in a story on the wires at work. Apparently six million people in Britain think they could write a book, three million have started writing one and a million have completed one that will probably never be published. It's a sobering thought.


If that sounds as if I'm getting cocky about being an author, nothing could be further from the truth. I'm still filled with the same doubts and fears that have plagued me all along the way, expect more so because there's now a weight of expectation, not least from myself. I don't worry about the words or the sentences, but I do worry about what I'm doing with them and if I'm creating the kind of story someone wants to read. I'm not a conscious writer at all, I don't sit down and think, 'what am I trying to achieve?'. All I do is write, and if I'm writing the wrong thing I don't know if I'm consciously clever enough to mould it into something appreciably different. I've just sent the rewrite of Claudius, the follow up to Caligula, to Simon at Transworld. As I've explained in past blogs, there were some fairly fundamental changes and when I was working on the book I was constantly wondering if I was doing the right thing, going in the right direction. There were passages that seemed at odds with everything I'd done before. Yet when I read it three times in the last couple of weeks the whole thing seemed to blend together as if it had only ever been meant that way. And still I had that feeling of not wanting to let go, to keep it and change a word here, or a phrase there: to keep polishing it until it glowed. What you forget is that there is probably still another nine or ten months until it's published and that you're going to get another half a dozen goes at it before it's wrenched from you for the final time.

The trains are on strike this week which means I couldn't have done any writing in any case, so I'm having a short break before I launch into another book. It's half written in my head and the main characters are all real to me, but it'll be a complicated beast and I think I have to do a bit more plotting - or at least place a significant number of signposts - before I get started.

I'm still working with someone on a website, but we've passed a significant hurdle and it could be less than a month before it's up and running. This blog will be linked to it. Can't wait to see what it's like.
Posted by Doug at 13:57 No comments: